In part one we build an attachment that uses a rubber band to solve a competition challenge. The rubber band was released with the use of a motor. In this video we are removing the dependency on the motor and you could use the motor for other missions.

This is where the rubber bands come to play. For most attachments you need a motor and you can only use a limited number of motors at each competition round. So an attachment triggered with a rubber band could solve a model without the use of a motor. And you could use unlimited number of rubber bands for a robot construction and there are few in each EV3 and NXT Mindstorms set. 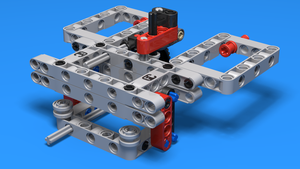 Building instructions for a Full LEGO Mindstorms EV3 Competition Robot that could be used in LEGO Robotics competitions. 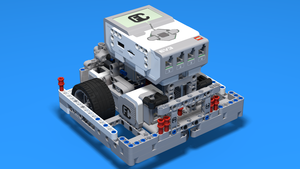 Now we have, again, the attachment loaded, the rubber band here, and I'll add this gear wheel. There are many ways that we can think of of moving this whole part, this whole module here, up. If we move it up, it will release the rubber band. But we decided to show that it's an interesting mechanism, again, just to have it as an idea. We add a gear wheel right here, and we have the gear wheel. We have the two gear wheels, and when one of the wheels is moving, it will push the other wheel up. Let's see this in action. I add the attachment. I add the mission model. Now, again, you program the robot moves on the field and it reaches the competition element, and we push the element. The mission element is released, and we solved the mission. To make it easier for everybody, we've added instructions for building this attachment just to have a closer look at it, so you can inspect it and see exactly how it works.