Use the program to download it on the robot and run it. Experiment with it. Try to read it and to understand it. Make sure understand what is happening in the program and what is the idea. Move through it with the students and team members and help understand how the program works. Only by reading other peoples programs we get to learn new things that we can use in our programs.

We decelerate and we reach the end. So after each and every if else check we set the movement speed to the speed that we've calculated. Again, while we rotate, we constantly calculate the speed that we want to set to the Motors. If we are in the process of acceleration, which means we are still less than half of our path, then we accelerate. As we pass the half of our path, we start accelerating and we constantly change the speed of the robot. Set movement speed to percent.

The same repeat until block right here is executed but with different signs if we are with a minus angle. So it's the same program, but just with minus angle. And this is how we've implemented our. Own blog for acceleration and deceleration. A blog that you can take and you can use in your programs and you can accelerate and decelerate while turning with the motion sensor, which gives you a pretty good precision. I hope you enjoyed it. And we'll see you in the next tutorial Where we'll do ten consecutive runs. 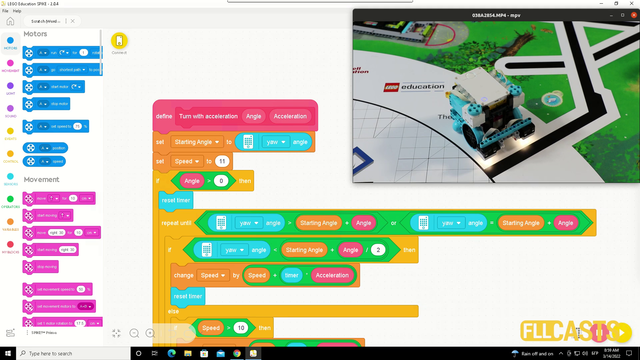 10 runs on precisely turn with acceleration and Motion Sensor from LEGO...

10 runs on accurately reaching a mission model with basic use of Motion...

10 runs on accurately reaching a mission model with basic use of Motion...