In the tutorial we have divided the mission into three tasks. The first one is to put the robotics insert in place. We have suggested one straight forward solution and one that count on the shape of the insert. In both cases you need to be precise, while leaving the insert. You could achieve that, by aligning either to the border of the field, to the green line in front of the mission model or to the mission model itself. Find more by watching more tutorials on the topic here.

The next challenge is how to push the insert, so that it unlocks the loop from the arm. With the first attachment we make a small modification, while with the second we make a modification in the program. This is great example how you could solve a problem both with hardware and software, depending on the situation.

The third part is how we catch the falling loop. This is not necessary for completing this mission, but it is part of the Project-Based Learning mission. Here the main point is that you must try to catch the loop as close to the arm as possible. The larger the distance from the arm is, the larger are you will need to cover to be sure that you catch the loop.

At the end we illustrate the methods with examples from teams competing in the FIRST LEGO League 2014 World Class Challenge.

How did you solved the mission? Did I missed an interesting way for solving it?

Building instructions for the first slide for the robotics insert

- note that I have added two angled beams and an axle to illustrate how you could use the slide as an active attachmen; 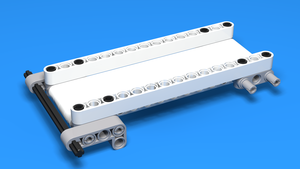 - note that I have added two angled beams and an axle to illustrate how you could use the slide as an active attachmen. 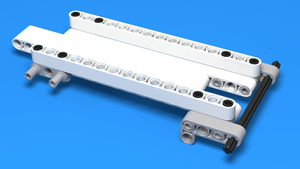 - Today I would like to show you some ideas I find interesting in completing one of the 2014 first Lego Leagues missions called Robotics Competition. The mission seemed fairly easy, but it has its little tricks.

As usual, let's begin with repeating once again what was required. There are two required conditions for scoring the mission. It follows. The robotics insert is installed in the place shown and the loop is no longer touching the robotic arm model. However, for scoring the mission it is not enough to accomplish the required conditions, but also it matters how you did it. So at the end of the match no team supplied object should be touching the robotics insert and the loop has been released due to the movement of the slider only. That means that you could not push the lever with the robot, nor it could lead level pieces together with the robotics insert. Now when we're properly informed about what should be done, let's begin with the execution. The mission could be divided into three challenges. The first one is how to put the robotics insert in place. This is the easiest part because you can just slide it so it falls in place. However, you need to be precise in positioning the robot. This could be achieved by aligning either to the border, the green line, or even to the mission model itself. You can find more on the topic just by searching "align" on the silver bar above or following the links in the description. Another way is to count on the shape of the robotics insert. You could use the fact that it has a slide from the side, so if you put it on axis and push it against the mission model, the robotics insert will slide and trace the height while bending the axis. Once the insert has passed the front beam of the model, the axis will return the insert to its initial height. Now if you pull back the attachment, the insert will hook on the front beam with its edge and the insert will stay in place. This I believe is a rather clever way because it uses a static attachment for solving the mission. The next challenge is how you put the insert so that it releases the loop from the arm. With the first attachment I showed, it is hard to push the insert after it has fallen. However, if you make a small modification to the slide and have two of the beams to jut out a little bit, you could use them to push the insert so that the loop is released.

With the second attachment, we have a problem with this beam over here. When you push the insert, it face the beam and could not push the lever. In this case, it is enough to pull back with the robot a little bit, but enough for the axis to be not all the way into the insert so that the front of the insert could drop in height. Then you just push and loop is released. The third and most challenging part is how to catch the loop. It is not part of this mission, but is part of the project-based learning mission. The problem is that the loop do not fall on the same place each time and you have to cover a large area. I have seen several solutions of this problem and all of them count on the fact that this area is smallest when you are close to the arm. Here you could see a team using this Lego Deathstar as a cup where the loop falls. What is amazing is that the success rate of the team was almost 100%. Another way is to have a fork below the arm as this one and when the loop falls, it hangs on one of the axis and you take it back to the base. Now let's take a look at several video clips of teams completing the mission. Now it's your turn. Have I missed a way to solve the mission in that video? Let me know in the comments below. Bye.