The robot attachment build in this tutorial gives an idea on how to release a rubber band at a specific moment using a motor. It's a simple, but yet powerful technique on using rubber bands.

The Mindstorms EV3 Robotics sets come with a few rubber bands in them that could be used for different robot construction. Most of the time Rubber bands are used for triggering an attachment without using a motor when the robot touches a mission model. This is shown in Rubber bands - Solving the FIRST LEGO League World Class COMMUNITY TREE. 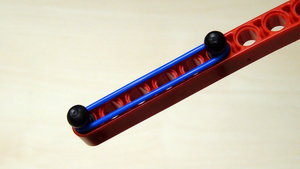 - Previously, we started a new series on how to use rubber bands from the EV3 Mindstorms set. In this video, we can use the rubber band, the motor of the robot, and we are solving a 2014 Mission Challenge from the F.L.L.competition.

This here is the mission. Just as a reminder, we have this small mission element, and we must push it here. And the loop is released when we push.

I'll load it again. And again, the mission is to push the element so the loop is released.

Let me just load it again and now use the attachment. We've prepared an attachment for this. This attachment is attached to the motor and it has a rubber band, as you can see right here. And this rubber band will be used for firing the mission model. I'll load it. I'll add it to the robot.

Now we program the robot to move around the field and when it reaches this mission model, for example, right here, something of that sort. And then we release the rubber band and fire the mission element like this. Works every time. Let's just take a look at the attachment and some details on how it works. Looking at the attachment, it's not a very complex attachment. But it has some tricks, for example, when using the rubber bands, it's always a good idea to twist the rubber band. This way, the firing is even. As you can see here, the band is twisted. So, always try to twist the rubber bands whenever this is possible. The other thing is, right here, when you have a moving shaft and the other end of the shaft, you should always use, well, not always, but most of the time, two of these yellow parts to stop the shaft from moving so that it can be quite stable. And having this in mind, it's a little tricky to load. For example, we must push the rubber band and then we must load it.

In this position, the attachment is loaded. The rubber band is ready for firing and we have the wheel attached to the shaft when we place the mission model. And when the model turns, like this, we'll fire the mission model. - That's for this attachment. In one of the next videos, we'll try to remove the dependency on the model and to make the attachment work only with the rubber band, without the need for a motor.

Attachment that mechanically aligns to a mission model - Cloud Challenge from...