Using Rubber Bands is not always very accurate, but is quite fun and can do the job. This video tutorial is showing a simple solution to the FIRST LEGO League World Class Community Tree challenge. The challenge involves a loop that should be pulled out from the mission model.

What a rubber band gives you in this situation is the ability not to use a motor for solving the challenge. You "save" the motor for other attachments and mission models. As a result the loop should be removed from the mission model. 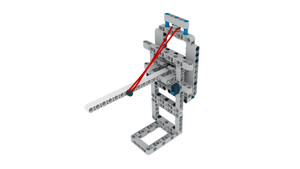 - Based on a number of your requests, in this video we decided to start a new series on how to use rubber bands. In the Mindstorm sets, there are rubber bands that come with the parts. For a particular example, you're going to solve the First Lego League 2014 Team Challenge. It's called the Community Tree.

The mission goes like this: the robot must go to the mission model and then pull the loop. And then bring it back to base, but that's not the most important part. It's actually how do you pull the loop out of the mission model? In this video, we are using the rubber band. A few things to mention about the rubber bands. They are not very accurate but they are quite fun, and you get the advantage that you have the model free for the specific mission. Now, let's look at the attachment that we have built. This here is the attachment, and this is our robot. You can find a link for building the robot. Intructions for building it are below the video. This is our robot. We use this robot from Video 58. This here is the attachment. We add the attachment at the front of the robot. First I will show you how it works, and then we will look further and explain the mechanism. Then, we load the attachment. It's ready, and we have our loop.

Now, when we approach the mission model with the attachment, and we get the loop. Then we can return and bring the loop back to base.

Now, let's take closer look at our attachment. I'll first deconstruct it. It consists of two parts. This is the first part. It's not very interesting. And the second part with the rubber band. Just show you this part here. It's quite important because it makes the rubber band stay at the position. Then the second important part with the rubber ban, this one here, because now we can attach the lever--we call this a lever, the wide part--and, as you can see, there is some force applied from the rubber band to the lever. The rest is just a frame. The mechanism is important; the rest is a frame that's for this particular robot, but for another robot it will be different. Here we have the mechanism, so we pull and it returns. Now, let's add the second part of the attachment. Here it is. And what the second part does is to help us have the lever in place and load it, and only release the lever after we push the second part. Here it is.

Now, when we move, and we move towards the mission model, we push the second part of the attachment, the lever is released, and we can return back to base with the loop. You can use this mechanism in many other competition models for solving other challenges, and in some of the next video, we will stop at how do we solve different other competition challenges with the rubber bands?