Collect the humans and clear them from the rocket launching region. This is rather straightforward as a task, but it requires a little bit of thinking if you want to do it without manipulators.

Below you could see the field of the World Robotics Olympiad (WRO) 2014 Elementary challenge. The humans must be moved from the field to the red region. For this robotics competition we use a robot that has a container inside of it and can collect the humans inside. This is an interesting robotics design that could be used for smaller objects.

Building instructions for the robot used in WRO 2014. It is a small robot with two light sensors and could be used for collecting elements.

The robot is built from LEGO Mindstorms EV3 parts. 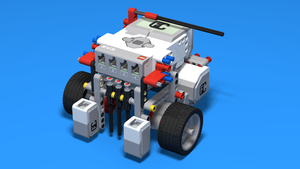 Program for the WRO Robot 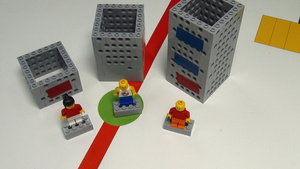 Previously we did a small example on how can we collect the rocket elements from World Robotics Olympiad (WRO) 2014 competition and we collected the elements, we positioned them like this and we lifted and we were ready for firing the rocket. Before firing the rocket we must clear the whole field, all the humans.

This is the subject of today's video.

How to clear the humans, we have 3 humans positioned in places on the field and you can find a map of the field below the video and, of course, in the previous video we had a sample run. Now how do we collect the humans. This here is our robot. For this robot we use the medium motor to control an attachment that will collect the elements for the rocket. So we want to use a motor for collecting the humans. What we came up with is to use the belly of the robot, we'll build a robot with a belly, an empty belly and with this belly we'll add an element that's kind of a carabiner, so it's letting things get in but it's not letting things get out. As we move over the humans, like this, we move over this human, we take it and then we have the human in the belly of the robot and we can move. Then we can collect the other human, like this, and again move and as you can see they are right here in the belly, but because these axles don't let the humans escape it's quite interesting solution. Again we move, we collect, like this and then we move over the 3rd human and we have all the humans in the belly of the robot and we can continue and return them back to base to the safety zone. That's how we collect the humans. Very simple. Find the instructions for this robot below the video.