(LEGO humans of course, not real humans :) ). Working on World Robotics Olympiad 2014 elementary challenge. Collecting modules, bringing them together and lifting them. A very funny and interesting competition that we would explore in this and the next video tutorials from the series

World Robotics Olympiad (WRO) is divided on different levels. Here we are exploring the elementary level for the younger students. The goal of the competition is to construct a rocket and to fire this rocket into space. We love it. It is so interesting. 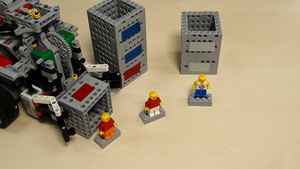 In these series of video tutorials we would introduce you to the World Robotics Olympiad (WRO) 2014 competition. In this competition we had these mission models, along with the 3 LEGO humans we'll accomplish the tasks with them and we'll do an explanation of our robot that we have here. My plan for the series is to first start with a small introduction of the competition and a very simple run and then continue with explanation for different missions.

After this simple example run let's return to the rules of the competition. The rules of the competition state that the general idea is that we are launching a rocket and these are the 3 modules of the rocket and we must assemble them like this, so that we can fire the rocket and we should also clear the area from the humans and we should gather the humans and do something with them so that we can clear them. These here are the modules of the rocket there position on the field you can see below the video the map of the field and you also have in the beginning of this video a small simple run so you have a basic idea where these elements are. The robot moves, collects them and it brings them to the following mission model. Now in this mission model we have a part that is already placed on the field. These are the two grey beams right here and we have this construction already on the field and we build the rest around it, so we have the rubber bands, this frame here, this lever here and as we have these as initial conditions we have our module like this, the goal of this model is to lift the 3 modules of the rocket and to fire them, it's not actually firing but at least they look like a rocket. How do you do this? Initially the model is positioned like this, we move with the robot and as we move with the robot we lower the lever, then we move with the robot and we place the largest module, like this, then we place the medium and we push, then we place the smallest and we push. Now as we push this whole element is fixed on the field, as we push, what will happen is that the rubber bands will be released and we'll lift the rocket and we'll lift the rocket and we have the rocket in this position.

How does this model work? It has a rubber bands, 7 rubber bands here, so that we have enough power to lift the 3 modules and we also have a lever right here,

the white lever and when we release the lever, we push on this lever and we lift them. So that's for this model, you can find the instructions below the video.