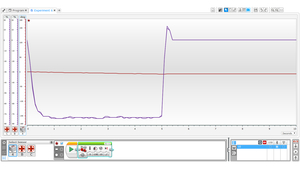 EV3 Phi. Teacher's note about a cup of water on the robot