Arduino Basic Course. How to use the sets in the classroom

The course is very suitable for students and you don't have to buy a new set for each student. You can group them, divide them, organize the use of the sets and you could technically work with 70-80 student with only 6 sets.

Just divide the studens in groups of 12 and each two students work with a single set. After they've completed their work, they deconstruct the device and it is ready for the next group where it is constructed again.

All the students get to work on a devices and construct them. Everybody get the chance to program them.

In this video I would like to spend a few moments discussing on how you should use these sets in the classroom.

As I've mentioned previously this course is very suitable for students, for a group of students and you can have a different set for each student. But you can also afford to have just one set for each two students. And you can have different groups of students that are using the same sets. For example, the first group can construct something and then disassemble it. And the next day with the other group we use the same set but it will have a different construction. Now, this includes a little bit more planning and you should think whether it is worth it. Or you can just afford to buy more sets for all the students. Now, that's a decision up to you. But we've used them and it's really possible to use one set for two students and to use six or seven sets for a number of groups. So, if a group is about ten or twelve students and you have six sets for the next group that is tomorrow you can use the same set. Just deconstruct the different pieces and use the set for the new group. 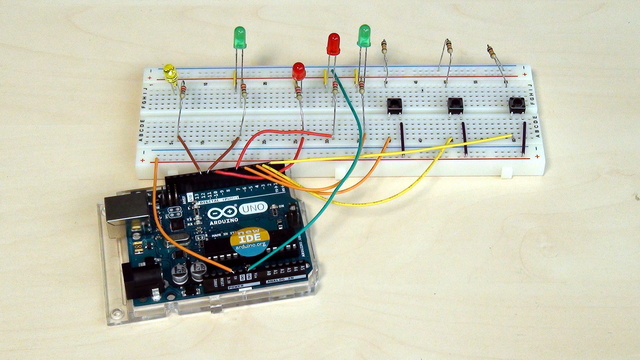 Starting with Electronics and Arduino

Robotics is great. Mindstorms are great. But for a student to take the next step he or she needs to take a step back, learn what's 'below' and from there discover what would be 'above'.

So we, the content creators at FLLCasts, in order to teach the world of electronics and prepare the next generation of creators from the youngest age, by presenting knowledge, asking questions and searching for the answers of these questions, are building this course for basic electronics with Arduino, that we call "Starting with Electronics and Arduino".

The course is still in development

Prepare for the course

Why - because we believe any student and basically anybody must have a basic understanding of how electronic works. This course gives us the chance to present it and to move forward to better and smarter robots.

How - we do videos, we set tasks. You solve them.

What - we are using Arduino. Because it is popular, it is easy and we like it.

Starting with Electronics and Arduino

Arduino Basic Course. How to use it with students

Arduino Basic Course. Uploading program to the controller and configuring the...

How to use the phone to control the rear motor