We continue from part 4 where we made a controlled experiment to transfer power from a Mindstorms motor to the rear wheels. The construction was too complex and inefficient and in this video lesson we are improving it by lowering the differential and removing all gear wheels from this LEGO Mindstorms EV3 Competition robot.

The robot is constructed with a 'front', 'back' and a frame in between. In this video lesson we are working on the 'back' (also called 'rear' part when it comes to vehicles). We lower the differential and attach the wheels without using any gears. The construction is very efficient, simple and robust.

Continuing from BigDaddy Competition Robot (Part 4 - Complex Transfer of Power) we remove the very complex system of Mindstorms gear wheels. The differential is also changed and attached to a part that is not a grey frame.

This construction uses a differential. Both wheels could turn with different speed and this makes a construction much more stable when turning. 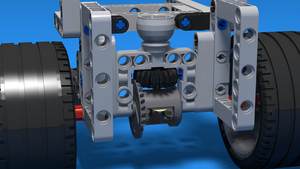 In the last video of the series we ended with a construction of a new competition robot that uses a differential gear at the rear part of the robot. And we can also turn using only one motor. And it's a very interesting construction. But it was quite complex, especially at the rear part. In this video I would like to explain the problems and walk you through solving some of them.

First things first. When you don't like something in your construction, try to disassemble it; remove it completely. In our case I really don't like the rear part of the robot, so, I'll just disassemble it.

Now we remove the blue pins.

And the other ones.

Here it is. It's quite stable and at the same time with a minimum amount of parts. And it's becoming much more beautiful. Let's connect the wheels.

One wheel, then the other one. Yes, we have the same distance between the rear and the front wheels. Now we should find a way to attach the back part of the robot to the front part using the base. Again, I've come up with a solution. It involves the grey frames. One frame, the other one. These frames are very useful.

And now we attach the construction.

What you can see is that I have disassembled all the parts from the previous construction. And you can see that we have used many parts But in this construction we have used the minimum amount of parts. We have the differential gear directly connected to the wheels and we have not that many parts in the frame and it's quite stable and it will do the job. So, as a rule, always remember to try to connect the wheels directly to the differential gear so that you can reduce the number of gears that are used and in this way reduce the complexity of your robots. In the next step, I will attach a frame as it is at the front. The last step of improving the rear part of the robot is adding shields around the wheels that could be used for aligning the robot to a wall or for just not hitting different elements on the field. That's the same principle that we've applied to the front part of the robot. Another important thing is that each wheel and each axle should be connected at least at two points. The axle of this wheel is connected at only one point - on the differential gear. I've prepared the shields. They are quite simple - again just beams and angled beams. We add the shields in the following way. Again, as separate modules. One. Two. Three. In three steps. And the other one as well.

Looking at this construction, we should improve the stability and we've prepared two additional beams at the rear part of the robot.

And one that's added internally.