This third way of positioning the LEGO Mindstorms EV3 motors on the robot seems to be the most productive with the most advantages. We have named it "correct", but we completely understand there might be other even more efficient ways to position the motors on the robot.

In the BigDaddy series of video tutorials on robot constructions build with LEGO Mindstorms we have showed three different ways to position the motors on the construction. Engineering and re-engineering as needed and explaining the advantages and disadvantages of decisions we have made.

Whether and how you could use this robot during the FIRST LEGO League competition or other robotics competitions depends highly on the tasks involved. In some of the next tutorials we would look at specific examples on how some of the FLL tasks are solved.

Other episodes from the series: 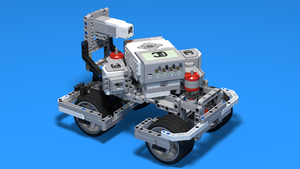 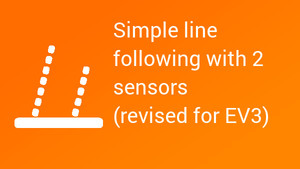 - Up until now we've constructed a robot that's very stable, the BigDaddy construction, and it has a front part. It has a rear part with a differential. You can check out the previous videos. And in this episode, we will explore different ways in which we can attach the motors so that we have control over the front part of the robot and the rear part of the robot.

Continuing from last video, there are a few slight modifications for our construction, and we've improved the construction right here. There's our new gray parts and these gray parts we use them because they are just beams and we have much more beams in the construction than the other parts. And we've also add some additional modules here to make the whole construction much more stable. Having in mind that, our next step is to find a way to position the motors, here are two motors and we would like to use one of the motors to transfer power to the rear wheels and one of the motors to turn the front wheels left and right. First, I'll add the axles right here. And right here now we we're experimenting with different solutions. We could add the motors in different ways. In this video, particularly we decided to add to the motors in the following way. First, we attach the two motors together like this, and that way have motors touch. We put them in the way that we have the axles. One and the other. Now as you can see this construction would not work since the motors are attached only on the axles. We must also attach the motors to the frame of the robot. Let's remove them. One second. Now there's a frame. There are different ways, we've decided to use.. I've already prepared the module for this.

And it's a simple module with a few beams and a few pins. And if we add...

Now we have the motors. We have the frame. We should just push them and they'll attach to the pins.

One more pin is missing right here, and we're done. We have our motors attached in a way that we can transfer power to the rear wheels and transfer power to the front wheels. As a last step, we are left with a third medium motor that we used for different attachments. And if we consider that this is the front part of our robot, as mentioned, you can always think of this being the front part of the your robot but let's just for moment think that this is the front part, and probably the attachments will be somewhere around here and we need to somehow transfer power from the motor to the attachments. We have the medium motor in the inter-construction in three sets and we can add the medium motor for example here above, or here or over here, and just for the sake of the experiment we decided to add the motor right here, on the left part. And now we are going to transfer power from the motor to the attachment with this very interesting module. It's called a shaft and specifically it's a Cardan shaft and it can transfer power in a certain angle. For example, you can transfer the power when you hit the whole shaft vertically but if one of the parts is a certain angle from the other you can again transfer part of the power. And we should mention that you're always losing part of the power. For example if you go to more than 45 degrees, it's now becoming even impossible to transfer a reasonable amount of power from the motor to the end of the shaft. Let's attach this shaft on our robot.

Here it is. Technically, it would be possible to transfer power from the motor to the end of the shaft, but practically it's not a good idea. That's why in the next video we're searching for other ways to position the motors so that we could get the two driving motors, and the medium motor with the brick and position them in ways to have space.