The attachment is now so advanced that we can do two tasks at once with it in order to solve the FIRST LEGO League 2014 World Class Search Engine Mission.

The Flywheel, build from LEGO Mindstorms EV3 parts, accumulates the energy and uses this energy to complete the mission. Accumulation is done with the Rubber Band, Very tricky and nice principle for completing different missions.

Find the previous videos from the series at:

Kiril Mitov's most favourite attachment. To quote him "I had a really great fun building this attachment and recording the videos for it".

It's an attachment with a Rubber band and a Flywheel and a Gear Wheel and a Worm Gear. So much knowledge in just one small attachment. The goal of the attachment is to be able to have an active attachment without actually having a motor. So you can place that attachment and it will do the work for you instead of using a motor to power it.

When placing the rubber bands check out the tutorials

Placing the white rubber band is shown at https://www.fllcasts.com/tutorials/105-rubber-band-attachment-with-a-flywheel-solving-fll-2014-search-engine-part-2 at around 05:40.

Placing the red rubber band is shown at https://www.fllcasts.com/tutorials/104-rubber-band-attachment-with-a-flywheel-solving-fll-2014-search-engine-part-1 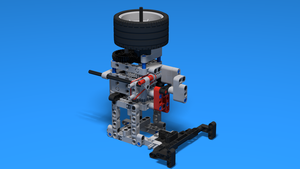 - For this video, we built an attachment that was solving the First LEGO League 2014, so changing and we built a small model for taking the loops. Today, I would like to extend these attachments so that we can take over the other loops. For now, we are taking only the yellow loop like this. The solution is pretty straightforward but it has some tricks. Let's say that for example, you have initially blue selected and you must take the blue pin. Then we must somehow extend our model here with axles so that we can take the blue loop. How do we do this? We have another model of axles and we do the same with it. Again, we load our rubber band attachment, then we program the road. It moves from the field, the border is right here. We reach the mission model, when we reach the mission model, we position the attachment so that we can push here on this lever. We trigger the attachment, it works, and then we return back to base with the blue loop. And we have the mission solved. Again, the robot is right here over the attachment. It's a pinless attachment. Let's do this again, we reach the mission model, we trigger the attachment right here. It's starts rotating and then we return back to base with the blue loop. In the same way, we can extend the whole model with the axles here so that we can reach the final loop, the red loop. And we also kept these parts, let me just extend...so let's say that initially, the color circuit was red. We have the attachment folded, then we program the robot, it moves on the field, it reaches the attachment, the mission model. We position the attachment in a way that we can push here, this lever. And when we trigger the attachment, it starts rotating and we then return back to base with the red loop because we've already taken it. And this is how we can solve the whole challenge with only...with actually one attachment. It's an attachment that has two rubber bands, it has a fly wheel, it has a gear mechanism, it has a model with axle for actually taking though. It's a very interesting challenge. I welcome any comments on this. Try to build it. You can find the instructions for building this attachment below the video and try to implement it also for other missions.

Important improvements on Rubber band attachment with a flywheel