In this tutorial, we would implement a program that finds the minimum and maximum value detected by the sensor and stores this two values in an array.

First, we detect the raw sensor for the given sensor. The block is available in the "advance" blocks palette.

The same logic is implemented in the program with the only difference that the knownMinimum is stored in an array.

Storing min and max in an array

So the odds store the minimum values and the evens stores the maximums.

In the previous tutorial we stopped at the initialized block where we start the program, it initializes the array, shows the value of this array on the brick screen and now it's time to actually move forward and find the minimum and maximum value for a single sensor - to calibrate a single sensor. If we look at the program that we've provided with the course the calibration EV3, you can see the whole logic of the program and we've already in our example that we are developing during the tutorial we've already implemented the InitArray. Next, we need to do the calibration. And this is the part with the calibration. So, we'll do it in a very simple way for a single sensor. And then we'll do it for more than one sensor. First, what we want to do is to move forward. And I'll just move forward with both of the motors for unlimited amount of time and just forward with a power of 20.

Then we must do some logic in a loop. Detect the minimum and maximum. And we'll do this for exactly one second. There are many different ways to stop the calibration but the simplest way is to just wait for about a second. And then we stop with both motors. We just set off here. We start moving forward, we do some calibration and we'll have to implement the calibration in this loop, we do the calibration for about 1 second and then we stop. To do the actual calibration let's first look at the example at the program that we've attached to the course and it has a new block that's called CalibrateMinMax. And if you enter into this new block,

we have 4 different min and max values that are calibrated. And the whole logic is actually it's pretty large you can see

but you can also see that there is a repeating pattern.

we take an operation, we read the numeric array, 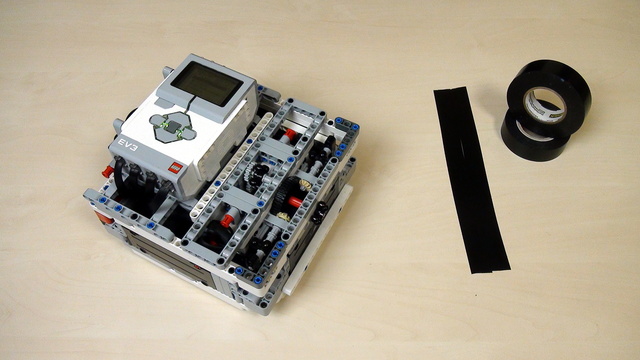 Would you like to resolve all the problems with the light/color sensors that you have? And to make all of them work in a predictable, stable way even when using more than one MINDSTORMS colour sensors.

When using Color sensors it is important to calibrate them depending on the light conditions in your venue. In this way, the calibrated sensor will show values between 0 and 100 independent of the light conditions. But using the default EV3 colour calibration available in the colour sensor block could lead to unpredicted problems that are difficult to track and resolved especially when used with multiple Color sensors. So in this series of tutorial we implement the calibration ourselves discussing the principles of colour sensor calibration.

Advanced Light/Color sensors calibration for a maximum value for a single...

Advanced Light/Color sensors calibration for more than one sensor

Task - Calibrate a single sensor with the Advanced Light/Color technique