VEX EDR Intro. Connect and program the Cortext controller to use the bumper switch Pro Preview

in the following way. Now the bumper switch is connected to the cortex controller. We then implement the program and we're ready to start it. Let's go and see how we implement the program. In the software we have to configure the touch sensor and we go to 'Motor and Sensor Setup', then we have the motors in the motors tab configured and in the 'VEX Cortex Digital Sensors' on port 1 because we've connected it on port 1 we add a touch sensor. And for this touch sensor we give the name 'touchsensor'. 'OK'. In the program what we have done previously is just moving forward with these instructions. Motor on port 2 and port 3 just move forward. Now what we want to do is to execute these two lines while[sensor is touched] And if the sensor is not touched

And one more time.

Take this program, try to implement it, download it to the robot and experiment with your robot. 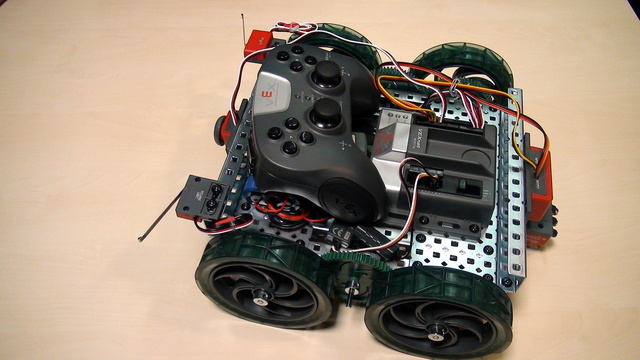 Designed to get students started with VEX EDR and RobotC. The robotics set is not very easy to use and offers its challenges. In the course we take a step-by-step approach to moving, turning and using sensors. A big part of the course is about programming and using the RobotC software for the Cortext controller.

This course is still under development and constantly change and extended.

VEX EDR Intro. Connect VEX motors to the Cortex controller. Use the motor...