This is a robot for the World Robotics Olympiad (WRO) 2015 Elementary challenge.

In the video we show how balls are released one at a time. We control how many balls we release with the chains. The chains are controlled with a single EV3 Mindstorms Motor.

We have tried to build the robot in a modular way with a Base and a Container.

Robot for collecting ping pong balls used in the World Robotics Olympiad competitions. It is constructed with LEGO Mindstorms EV3 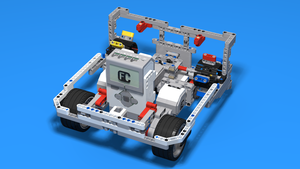 This is a ping-ball containing attachment for a World Robotics Olympiad. The attachment is building with LEGO Mindstorms EV3 parts. It is tiltel so that it is easier for the balls to fall off at certain points, which was part of the missions at the 2015 cmpetition. 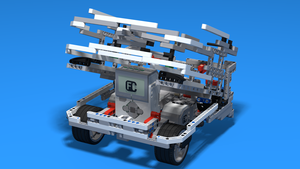 In this video we continue with our next robot for the World Robotic Olympiad (WRO) 2015. The mission for the elementary challenge involves the robot moving on the field and releasing balls. We must release these balls and this is our, I think 3rd or 4th robot that's improving on the previous robot. Let's see this robot and discuss the improvements. First I'll start with showing you how the robot works. I'll add a few balls on the left side and on the right side.

We have these chains here.

And this is how you can release one ball at the time. I'll just add different wait at the program so that you can see it more clearly on the camera and I'll start the program.

In this way we can control how many balls do we release when we move the robot on the field. Both chains are controlled with a single medium motor, right here and we have a gear construction that changes the orientation and this gear construction actually powers the 2 chains. As with every robot we can also configure this robot. The configuration of this robot is the number of degrees that the medium motor turns and this will control how many balls do we release on each turn of the chain so in our current configuration we are experimenting with 37 degrees but it might be 38 or 40 or we would like to release for example 2 balls at the time so we need another value. The other interesting value is the speed we need these chains to rotate not very fast so it's kind slow. In our current program the power of the motor is 20%. This is how the robot works. I'll start it. It's slow, it waits for about 2 seconds and then it releases the next ball.

We can even count the balls. It is pretty stable, if it is configured correctly with the correct number of degrees and right speed and this is something you can experiment with Then you have a nice working robot that can release the balls on this competition. The next interesting thing about this robot, I'll now stop the program, is that we have tried to build it in a modular way. This here at the top is the container, it's quite large and I could easily remove the container. It is connected, because it's quite light only with 2 pins. Now I remove the whole container. I'm left only with the base of the robot. This here is the base and it's 25x25 cm, I think so it's 10x10 inches and it's exactly at the limitation of the WRO and it's also a nice framework on which we can build other robots. You can see these red pins here and if we now remove them

It's pretty straight forward. The next thing is that we have this gear mechanism here that is changing the orientation for the gears, we have the gear in a horizontal way and we are changing the direction in vertical and we have 2 axles that are driving both chains. We can use this robot as a framework on which we can build. We also have 2 of the balls as back wheels, something that could take the whole weight of the robot. So this makes the robot pretty nice. In the next few videos we'll try to program this robot and work with it so that we can solve the elementary and even the more difficult challenges on the World Robotics Olympiad.