A robot that contains balls and releases them. It counts how many balls to release depending on the "treasures" it has hunted on the field. This is part of the World Robotics Olympiad 2015 Elementary challenge.

The World Robotics Olympiad 2015 Elementary challenge requires you to detect the colour of a treasure and depending on this colour to release a number of balls in specific region. The task is pretty basic, but it requires a stable robot that would repeat the release of the balls.

This construction was the first idea and it had some problem. We present them and try to fix them in the next videos. 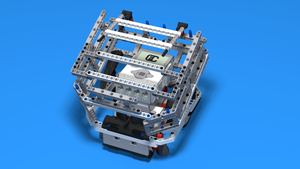 In this video tutorial we looked at the World Robotics Olympiad and the challenge from 2015 - The regular elementary challenge. You can check out the links below for the rules for the competition. It will be probably very nice competition and it involves the following challenge. The robot must move and the robot is previously loaded with 27 balls, that is the maximum and when the robot moves on the field it must at certain moment release the balls. That's the challenge. The ball must fall on the field. You can find the instructions for this container below the video but it seems that it was not working as we expected.

Let's now fill the container with the balls. The maximum was 27 so we can have fewer balls but we decided to go for the maximum.

That's it, these are all the balls. Now the container is full and the idea was that we move on the field and we have the motor at the front of the robot and then when the motor turns, probably some of the balls would fall on the field. As you now see, this doesn't quite work. Let me just start the program.

Now you're moving. You're shaking it. But they're locked. And it's quite difficult for the ball, one, second.

We thought it was an interesting solution. But at the end it seems that it does not work without manual push on the balls. So in the next video we'll explore other solutions and ways we can build a container from which the balls could fall. Let's see what we came up with.